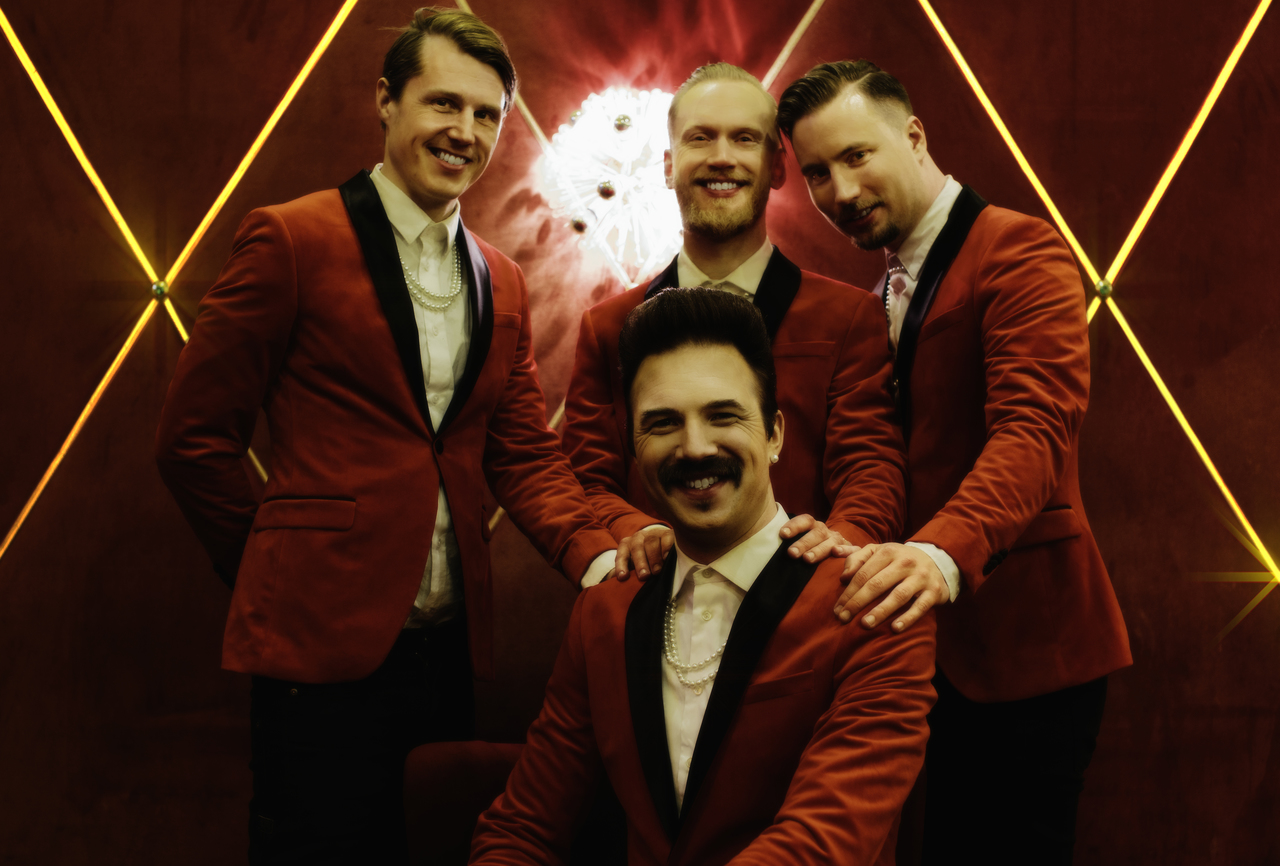 Royal Republic don’t believe in ‘guilty pleasures’ – only pleasures, free of compromise.
Since meeting at the Malmö Academy Of Music in 2007, they’ve become Sweden’s most
addictive rock’n’roll export; mixing riffy guitars, king-sized tunes and jet-packed beats with
their own eclectic tastes and inimitable joie de vivre. Plus the kind of snazzy suits most of
their contemporaries wish they had the balls to pull off. They’ll rock the shit out of you and make you dance like you’ve just won the lottery.

And still that question ‘what are your guilty pleasures’ often crops up. Because you can’t be in a proper badass rock band and enjoy 70s disco, jazz and pop, or listen to Metallica andCannibal Corpse on your tour bus and (whisper it) The Spice Girls and The Backstreet Boys… Or can you?

Fronted by moustachioed, six-foot-something dandy Adam Grahn, and completed by
partners-in-crime Hannes Irengård on guitars, Jonas Almén on bass and Per Andréasson on drums, Royal Republic are the band you’d want to play at your party. The moment the four ofthem first performed together onstage, the alchemy was extraordinary. And ever since 2010’s colossal debut We Are The Royal – with mega-hit single Tommy Gun turning headswell beyond Sweden – it’s been clear that something between them just works.

The riotous tour for 2016’s hugely popular album Weekend Man was triumphant proof of
this. Every night was packed with floor-fillers. From the biting hooks, primal roars and fourpart harmonies to their snappy stage attire and commanding stage personas, theirs is aseamless marriage of fire, flair and fun. The raw spirit of punk with the hips of James Brown and swaggering braggadocio of James Bond. No wonder they struggle to label themselves.

Plenty of other people have tried to, of course. Garage rock, pop rock, kung-fu rock and
even Chuck Norris rock are all tags that have been devised for their punchy, propulsive
brand of rock’n’roll. Now, with the arrival of fourth album Club Majesty, ‘disco rock’ has been added to the mix. “I love the word ‘disco’,” Grahn says. “But some people will say ‘but you’re a rock band!’ We’re a band. I never knew what to call us.”
For a bunch of guys as much in awe of Earth Wind And Fire and Michael Bolton as Led
Zeppelin and The Beatles, this is hardly surprising. For a long time, however, it was
something they battled with.

“We’re, like, nerds,” Grahn cheerfully admits. “And we always tried to hide it a little bit. It was always a case of ‘this isn’t rock and roll’, and we were like ‘yeah, but we can sing four-partharmonies, and we can do all these things that your average guitar rock band may not be able to pull off. So what are we so afraid of? Let’s buy those fucking golden sequin jacketsand get bouncy!’”

If Weekend Man was the album that really nailed their identity, Club Majesty is the sound of them embracing it from the word go. Written and recorded over the last year, mostly in the band’s headquarters in Malmö, it’s laden with ‘guilty pleasures’ – in an utterly guilt-free manner. This is an album for the dancefloor and the mosh pit, where rock guitars and drums sit alongside addictive choruses, shimmying rhythms and saxophone (the latter added less than a month after Grahn first picked up the instrument).

Opening track and first single Fireman And Dancer sets the tone. “When I See You Dance With Another was a catalyst for Weekend Man, and Fireman And Dancer was the same for me this time,” Grahn explains. “When I had the riff I instantly felt that onstage connection. And then we come in with a big ‘yeeaaahhh!’ and we think ‘oh yeah absolutely, let’s do that, that is tacky, let’s do it!’”

Another track that clicked into place quickly was Under Cover, though it wasn’t originally
meant for Royal Republic… “We got a request from an unnamed big-time condom
manufacturer to write a jingle for their new product,” Grahn grins, “and so that’s where the‘we’re going all in, it’s a win-win/I’m going undercover with you’ came from. Just the word ‘Undercover’ says at least two things. Very smart, peel back the layers, it’s very deep [laughs].”

From here the highlights keep coming. Want addictive hooks and strutting guitars? You’ll find them in Boomerang, followed by the irresistibly cool, sultry power of Like A Lover, and gleeful, dancey gems like Can’t Fight The Disco and Anna-Leigh. It’s like the most fun bits of the late 70s delivered in the freshest way possible, with lashings of raw oomph and absolutely no holding back.

But here’s the thing: by not actively trying to ‘be more rock’, Royal Republic actually rock
way harder than many of their peers. There’s something about their sense of freedom and confidence that transcends genre boundaries. Perhaps that’s why they sing Can’t Fight The Disco; whoever you are it’s damn-near impossible to fight the appeal of this music, whether you’re a fully signed-up disco acolyte or an Iron Maiden devotee.

Curiously it was a show at Sweden Rock Festival, by the bizarrely named Electric Banana
Band, that brought it all home for Grahn. “They’re these Swedish comedians who’ve been around since the 80s, they dress like fruit and they play the slickest songs,” he explains, “lyrics like ‘I wanna be a mushroom’, kids’ stuff, but it’s really well played and arranged. I saw them play the main stage, right between Hammerfall and Napalm Death, and it was packed.

It was insane. And it was a beautiful thing; all these super ‘metal’ people coming together
with their spikes and tattoos, because it resonated with their childhood memories, or they’re just drunk and happy.”

If you like Royal Republic, you’ll love Club Majesty. And for the uninitiated – rock fan, pop
lover, metal-head or otherwise – you’ve arrived at an excellent time. All are welcome here, so step inside…