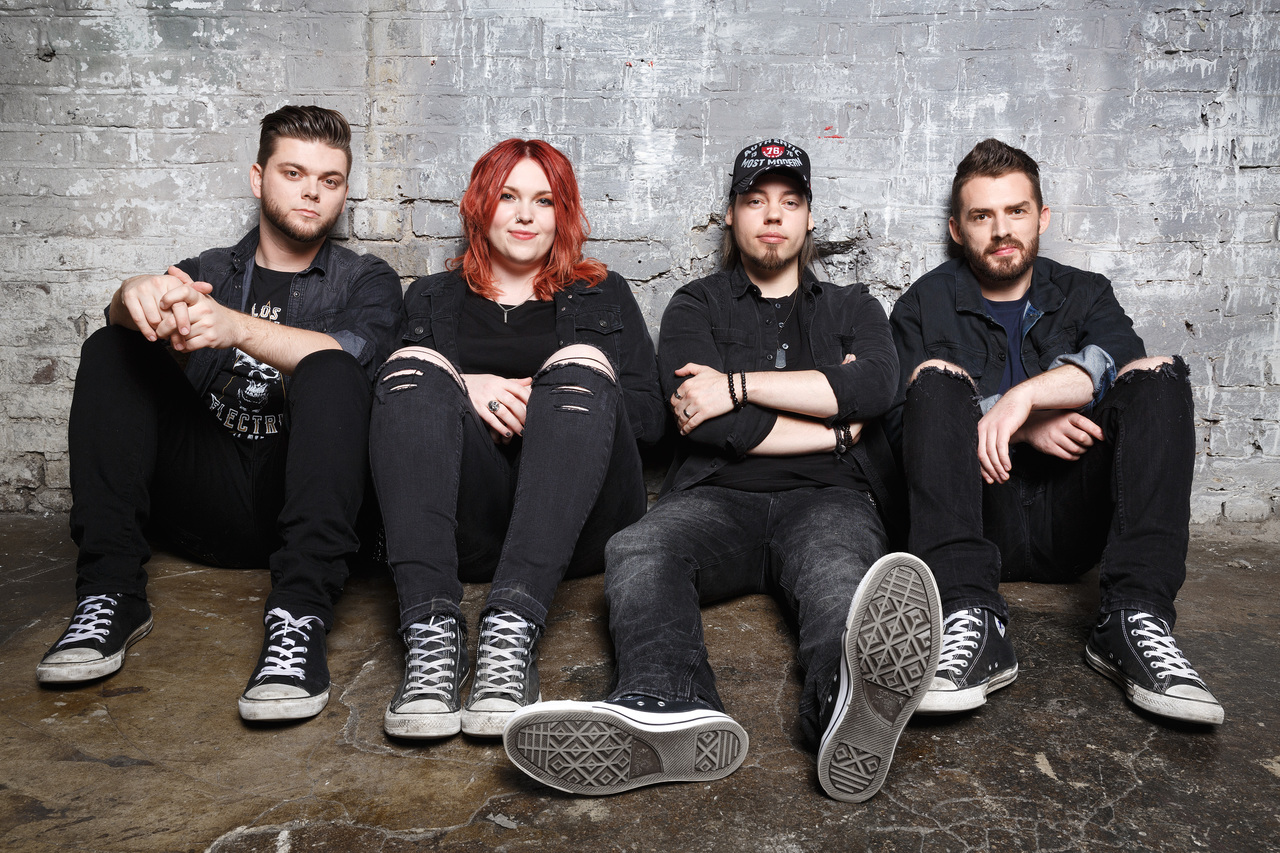 There’s an unwavering conviction running through the core of Stone Broken’s brilliant Spinefarm Records debut Ain’t Always Easy. It’s the notion of taking a leap of faith in order to take control of one’s own destiny, seizing precious moments and living your very best life, with no apologies and no regrets. It’s a philosophy close to the heart of the quartet‘s 29-year-old frontman Rich Moss, and a credo which fuels Stone Broken’s desire to take on the world with their music.

At the beginning of the decade, Moss had abandoned his life-long dream to become a professional musician, following the tragic death of a former bandmate who suffered from alcohol addiction. Years spent poring over guitar magazines, practising in his bedroom and playing gigs around the Black Country and West Midlands were filed away as memories, as Wolverhampton-born Moss built a successful career as an analyst. Yet the idea that there must be more to life persisted. In 2013, after four years away from music, he formed Stone Broken with guitarist Chris Davis, bassist Kieron Conroy and long-time musical soulmate Robyn Haycock on drums, with all four young musicians determined and willing to make sacrifices in pursuit of their dreams.

“The very first song that I wrote for the band is called This Life and it’s about taking what you’re good at and using it as a vehicle to move you forward, because you only have one shot at life,” says Moss. “We all came into this band a lot more mature and understanding more about the industry, and decided that if we were going to do this there should be no half-measures.”

The quartet’s first declaration of intent came in the form of 2014’s self-financed, self-released debut EP, The Crow Flies, a calling card largely intended to secure local gigs. But it was the release, in January 2016, of Stone Broken’s debut album All In Time which truly amplified the word-of-mouth buzz around the band from a whisper to a scream. With Kerrang! Radio and Planet Rock picking up on the album’s storming opening track Not Your Enemy, the anthemic Let Me Go and Stay All Night and the bruised and beautiful Wait For You, an ever-expanding audience was alerted to the fact that here was an emerging British band with the killer riffs, widescreen choruses and songwriting smarts to follow Midlands legends Black Sabbath, Judas Priest and Slade onto the global stage.

“We never wrote anything to fit into a scene,” insists Rich, “we wrote the kind of music we listen to. But we saw bands such as Shinedown, Black Stone Cherry, Halestorm and Alter Bridge as our peers. People understand that we’re here because we love what we do.”

In early 2017, following a lengthy European tour, the quartet entered Long Wave Recording Studios in Cardiff to work once again with All In Time producer Romesh Dodangoda (Motörhead, Bring Me The Horizon,Twin Atlantic) on their second album. The result, the 11 track Ain’t Always Easy, is compelling proof that the Wallsall quartet are ready to stand toe-to-toe with the biggest names on the contemporary hard rock scene.

Confident, muscular and absolutely loaded with state-of-the-art arena-friendly anthems, Ain’t Always Easy is one of the most assured British rock albums of recent times. From stirring fists-in-the-air opener Worth Fighting For, a rallying call for a newly-empowered generation, through to the blissful The Only Thing I Need, a feel-good, care-free slice of nostalgia best listened to while watching a new day’s sun rise above the horizon, it’s an absorbing, engaging and deeply heartfelt collection which marries important issues, both personal and pressing, to instantly accessible, granite-hard hard rock.

High points on the album are abundant. One might trace a path from Otherside Of Me through Doesn’t Matter and on to the magnificent I Believe to see an unfolding triptych tracing Rich Moss’ journey from bedroom dreamer through to rock star-in-waiting, the frustrations of working 9 to 5 poured into punchy, inspirational lyrics yearning for a shot at the big stages. “Honestly, you can be anything you wanna be,” sings Moss on I Believe. “I’ve got a feeling you’re gonna have the time of your life.”

“I Believe isn’t a note to self as such,” Moss insists, “but it’s related to my relationship with music over the years. As a teenager I’d flick through guitar magazines and see these rock stars and think, ‘I want to do that’, and then when the focus shifts to the present, it’s me telling myself and the band that we need that same self-belief to move to bigger stages.”

Elsewhere the album deals with the pain of addiction (Let Me See It All, Just A Memory), loss (Anyone), homesickness (the emotional, beautifully affecting Home) and, in the most striking, stark terms - with lyrics such as “I hear the screaming from your bedroom, it’s the same thing I heard last night…” - domestic abuse, a subject Moss admits is painfully close to home.

“It comes from experiences that I’ve seen personally, so it’s a heartfelt song, about how that impacts on the person and those around them,” he states. “With a song like This Life on our first record we’d get a lot of people telling us that it got them through a rough patch, and I’m hoping that this song might offer some strength and support to anyone similarly affected.”

It all adds up to position Ain’t Always Easy as one of the most mature, powerful hard rock albums of the decade. Set for release on Spinefarm Records on March 2, it promises to place Stone Broken at the forefront of a rejuvenated, emboldened and increasingly fertile British rock scene….and beyond.

“Who doesn’t like big, driving riffs and massive choruses?” asks Spinefarm’s Head Of A&R Dante Bonutto rhetorically. ”At last, a UK band with the sound and the attitude to make it possible for them to compete with rock’s elite.”

“The success of the first album took us by surprise, but we always wanted the second album to break down more barriers and get us to the next level where we can step up on a global level,” says Rich Moss. “We’ve already got fans in the US, and they tell us they can easily imagine us on the radio there. Every rock band dreams of success in America, but we feel we’re ready.”

“Among our fans – The Broken Army - there’s a massive buzz around everything that we’re doing at the moment,” the vocalist/guitarists adds. “This is a really good time to be in this band, and now we just want everyone to hear exactly why.”

“Anticipation for this album is really high,’ acknowledges Robyn Haycock, “especially given how high we set the bar with All The Time. But, as a band, I think we’ve all exceeded expectations. We’re so proud of this record, and so excited for what lies ahead.”

One life. One band. One vision. For Stone Broken, the time is now.